After having studied on glioblastoma the action mechanism at the level of cellular messaging, and performed “in vitro” tests on human Glioblastoma cell lines, Beta Innov invented a family of candidate molecules for the treatment of that disease. The first organic syntheses have been performed in the laboratories of the “École Nationale Supérieure de Chimie” in Montpellier (ENSCM) via a service contract. The first results of “in vitro” screening allowed us to select a molecule (BIM2b) which development and GMP manufacturing were started in 2013. The first efficacy tests on animal took place in 2014 at the ICM (Institut du Cerveau et la Moelle épinière – Paris) and are still going on. Also, the first optimization works of the drug’s formulation are ongoing.

Cells which constitute our body take their energy primarily from glucose. This energy is required for all molecular, cellular and physiological activities of the body.

In a Healthy Cell, the energy produced by the combustion of glucose is released from Mitochondria (one of the cell’s organelles) in the form of ATP. This is what is called “Cellular Respiration”.

In a Cancer Cell, energy production follows a different way. Glucose, at the end of a reaction path called “glycolysis”, is eventually converted to lactate by an enzyme: LDH (Lactate Dehydrogenase). Because of this major phenomenon, the cancer cell escapes certain defense mechanisms of the body.

Glioblastoma Cells (GBM), mainly derived from astrocytes (glial cells of the central nervous system), are special: they produce their energy a complex way distributed between respiration and glycolysis. The molecules of the BIM2 family, invented and synthesized by Beta Innov, inhibit LDH. As a result, an overheating of mitochondrial activity occurs which leads to death of cancerous astrocytes. 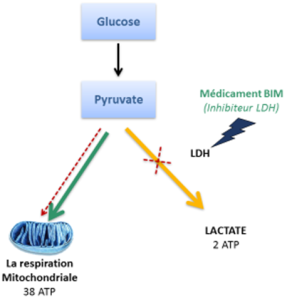 We demonstrated “in vitro” on two human GBM cell lines (U 87 and U 251) that BIM2b eradicates all cancer cells as well as the stem cells (CD133) that cause recurrence in patients.
BIM2b is not toxic on healthy human cells (astrocytes, kidney, hepatic and cardiac cells or skeletal muscle).
Mechanism of action: Beta Innov demonstrates that the BIM2 family inhibits LDH on molecular and “in vitro” GBM models.

We use cookies to ensure that we give you the best experience on our website. If you continue to use this site we will assume that you are happy with it.Ok