Origin of the discovery – The case of Mrs. LL, first patient in whom a proteomic imbalance was discovered.

Medicine still does not provide an appropriate response to severe immune diseases as well as to the state of progressive physical degradation and very debilitating that invalidates Mrs. LL since 1987 (severe pain, muscle weakness, fatigue, exhaustion, permanent flu symptoms…). Originally, however, Mrs. LL suffers from autoimmunity.

During her meeting with Dr. Marcel Mersel in 2009, Mrs. LL has reported that her pregnancy was the only period of her life, from the onset of her illness, when all her symptoms disappeared.
This situation led Dr. Mersel to hypothesize that autoimmune diseases could result from an imbalance in the ratio between the Heavy-Chain (HC) and the light-chain Beta-2-microglobulin (β2m) of the HLA I complex.
Indeed, during pregnancy, the function provided by the HLA I system is supported in placental cells by the HLAG system to prevent rejection of the fetus while protecting it from “non-self”. 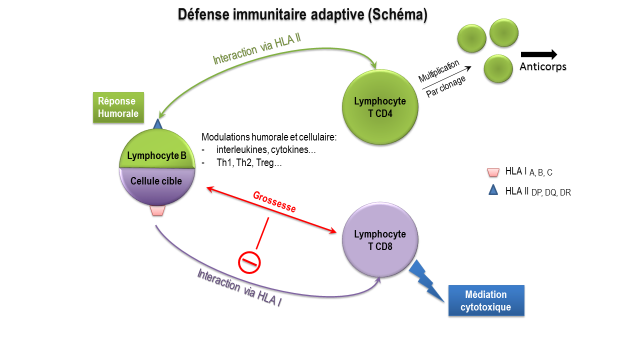 Studies conducted on Mrs. LL’s blood cells have since confirmed this imbalance due to deficiency of β2m on the membrane of B-lymphocytes. To understand this, let’s look at the immunological process as a whole.

The purpose of the immune defense is to protect the body against foreign matter. As opposed to all that constitutes us and that we refer to as « self », foreign bodies are described as “non-self”. Cells with “non-self” compounds are commonly described as antigens (Ag).

In Humans, the immune defense system is based on three “lines of defense”.

The second line, called “adaptive” defense, is more selective and is divided into two main classes:

HLA II System (humoral defense), the role of which is to generate the production of antibodies (Ab) specifically targeted against each identified Ag. The Ag-Ab complexes thus formed will be destroyed and disposed. For this mechanism to start working, HLA II which is located at the surface of “Presenting Cells” must intercept and literally present the Ag to a class of White Cells called T-CD4 lymphocytes. These will in turn cause the activation and multiplication of other lymphocytes, B lymphocytes, which will synthesize the Ab specific to the Ag that were presented.

HLA I System (cell-mediated defense), the role of which is to identify Ag that are present within the cell and which may be e.g. damaged or defective proteins from self, or non-self proteins encoded by a viral genome. HLA I’s role is to transport these Ag to the surface of the cell and to present them to another class of lymphocytes: T-CD8 lymphocytes. In doing so, this mechanism will initiate a process of toxicity against the cell carrying the Ag.

One can, in simplified terms, say that the HLA II system protects the cell against external aggressors while the HLA I system defends it against attackers which were able to get inside. But more recently, the possibility that free HLA I complexes, bearing no Ag, can be at the cell surface has been described. It is therefore possible that HLA I complexes at the surface of the cell be able to capture circulating Ag and present them to T-CD8 lymphocytes.

This possibility is at the heart of our development focus in Immunology.

HLA systems are protein assemblies. The ability they have to recognize specific Ag is based on a mechanism that is referred to as “key-lock”.

The HLA I system, which is most particularly of interest to us, is composed of a “Heavy” transmembrane protein Chain (HC) and a lighter protein: Beta-2-microglobulin (β2m).

It is the heavy chain folded in space as a kind of funnel, that we will call “presenting device” that captures the circulating Ag. But the shape of this funnel is determined by the association of β2m with the heavy chain.

In other words, when β2m is missing, the presenting device is distorted and can no longer recognize Ag, or can on the contrary recognize molecules other than Ag.

For the system to work properly, the HC/β2m ratio should be equal to 1. Any defect in the HC-β2m association disrupts cell-mediated immune response. 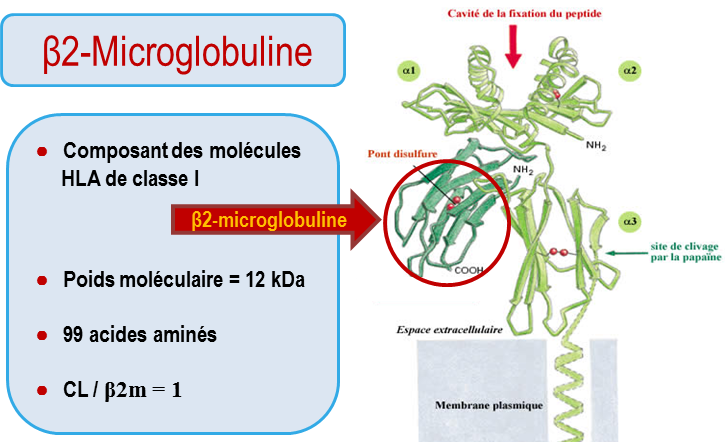 Beta Innov confirmed that for certain autoimmune diseases, the HC/ β2m ≠ 1 imbalance lies at the level of the HLA I complex.

Link with autoimmunity and working hypothesis of Beta Innov

The case mentioned above of Mrs. LL taught us that during her pregnancy, she no longer felt pain related to her pathologies. At the same time, during pregnancy, the HLA I system is no longer expressed by placental cells. By extension, why not think that this phenomenon can be extended to other cells? From there, Dr. Mersel imagined that some symptoms caused by autoimmune diseases could result from a defect in Ag presentation by HLA I to T-CD8 lymphocyte, presentation’s defect caused by improper configuration in space of the presenting device, itself due to a lack of balance between heavy chain and β2m.

The consequences of this defect could cause the HLA I system to present to T-CD8 lymphocyte, not Ag as expected, but elements of “self” and thus initiate an immune response against its own body. The HC/β2m ≠ 1 imbalance would as a result generate an autoimmune response, a molecule of oneself becoming an “auto-antigen” because of this imbalance.

The working hypothesis that led Beta Innov to conduct his research has therefore been based on the fact that restoring balanced HC/β2m = 1 through the use of drug in people with autoimmunity would restore the normal functioning of their immune system and would make disappear the associated pathology.

This new bioclinical concept, identified by Beta Innov, is illustrated by the figures below:

Proof of Concept: the ratio HC/β2m ≠ 1 for HLA I is a marker of autoimmunity – The Beta Bio Program

The Beta Bio Study is a program that takes place in the University Hospital of Montpellier led by its principal investigator: Pr. Jean-François ROSSI, who is a member of Beta Innov’s Scientific Committee. The University Hospital of Nîmes is in partnership as statistical platform. This program was authorized by the local and national health authorities (ANSM – formerly AFSSAPS). It involves analyzing the HC/β2m ratio at the surface of purified lymphocytes from blood samples taken from healthy donors and from people suffering from various autoimmune pathologies.

An original method of analysis of the HC/β2m ratio has been developed by the researchers of Beta Innov.

The analyses performed to date (over 100 cases on 250 planned) confirm a statistically significant way that the measure of a ratio HC/β2m ≠ 1 is a common biological marker to various autoimmune pathologies. The rate of Superoxide Dismutase, inflammation level marker, significantly decreases after “in vitro” incubation of pathological lymphocytes with liposomalβ2m.

These results confirm that the drug candidate would consist of giving patients β2m in order to restore HC/β2m to its physiological rate. The molecule is not toxic “in vitro” on human astrocytic cells, hepatic and kidney cells, cardiac and skeletal muscle cells. Intravenous injection of liposomal β2m in rat (Work done by WilResearch – Lyon) did not alter the behavior of animals and caused no “suspicious” death.

The next steps of the research program are already defined: optimize the formulation of β2m, develop biomarkers confirming proof of concept, perform preclinical stages (ADME) to finally test the effectiveness of the drug “in vivo” on a number of selected diseases.

We use cookies to ensure that we give you the best experience on our website. If you continue to use this site we will assume that you are happy with it.Ok